The Dreaded White Residues: Why They Form & What To Do About Them

The appearance of white residues, on circuit boards, is a recurring problem in PCB assembly, and generates many questions and complaints for the Tech Support hotline.

When contamination is found on the board after the cleaning step, the customer often assumes it has come from the cleaner itself. That, most likely, is not the cause of the problem. Usually residues form on circuit boards due to problems inherent in the nature of the soldering and cleaning process.

Chemtronics printed circuit board (PCB) cleaners, like Flux-Off flux removers and Electro-Wash maintenance cleaners, are filtered and made of 100% volatile solvents. That means they fully evaporate without leaving anything behind.

Most residues are the result of inadequate or partial cleaning, and can be eliminated by simply repeating the cleaning step. Unfortunately, there is another class of PCB residue that derives from more complex chemical reactions between the soldering flux, the cleaning solvents, the soldering process, the board laminate and certain process parameters, such a line speed and soldering temperature. These are the dreaded white residues, and often cannot be easily removed with conventional circuit board cleaners.

Ionic residues can cause corrosion if left on the board. The nature of the soldering flux used, soldering process and cleaning parameters, and problems with the cleaning solvents used, can all lead to the formation of ionic residues. R, RA and aqueous fluxes will all leave ionic residues if not cleaned properly. No-clean fluxes are engineered to consume the ionic material when exposed to soldering temperature and activated. Any no-clean flux that isn’t fully activated can leave behind ionic residue like any other flux.

Organic residues aren’t as serious, but spoil the appearance of the board and can lead to conformal coating adhesion problems. Organic residues can occur due to improper soldering or cleaning techniques or because of a mismatch between the flux and the specific flux remover.

It’s easy to determine the type of contamination you have on the board. Test each patch of residue with drops of water or isopropyl alcohol (IPA). If the water dissolve the residue, it’s ionic. If residue is dissolved by alcohol, it’s organic. This quickly tells you what it will take to clean the board (either a water-based cleaner or a solvent-based cleaner), and can give you some indication of what is causing the problem. In both cases, it’s more likely to be improper techniques or incomplete cleaning that causes the contamination problem.

To make matters even worse, when current is applied, ionic particles can link together to form conductive branches called dendrites. Theses dendrites form between contact points and cause either current leakage, or an electrical short.

Organic rosin residues can arise from a number of circumstances. Using old solvent, that has been stored for some time, can lead to incomplete cleaning. Isopropyl alcohol is used extensively in the industry as a flux remover and general PCB cleaner. IPA is hydroscopic, so will absorb water from the air during prolonged storage. Heavily diluted IPA is a poor solvent for rosin-based fluxes, and will not dissolve heavy contamination without lengthy exposure time. Also the water in the solvent can react with no-clean fluxes, leading to even more white residue on the board.

In hand soldering operations, there is a general tendency to use excessive amounts flux or flux with high solids content. This can lead to a heavy build-up of contamination, which is not easily removed with a single-pass through the cleaning process.

Using too much flux can also lead to flux solution being trapped underneath components. Cleaning must be performed in a manner that flushes this contamination from underneath the components; otherwise partial removal will result in rosin contaminant draining across the board after initial cleaning has been completed. Increasing the residence time of the flux remover on the PCB can prevent this from happening.

How to Fix the White Residue Problem

The following are issues that can be addressed to eliminate the dreaded white residues from your PCB assemblies:

Chemtronics offers solvent and water-based cleaners that are engineered to remove a wide variety of organic and inorganic residues. This gives you the flexibility to run different fluxes through the same cleaning process.

If you need help solving a white residue problem, or would like to develop a cleaning process that avoids the possibility of white residues, contact Chemtronics at askchemtronics@chemtronics.com or 770-424-4888. 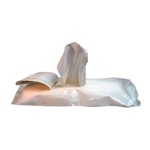 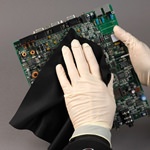 ESD safe, black polyester monofilament wipe
Add to cart More Info
You did not finish submitting your information to request a sample