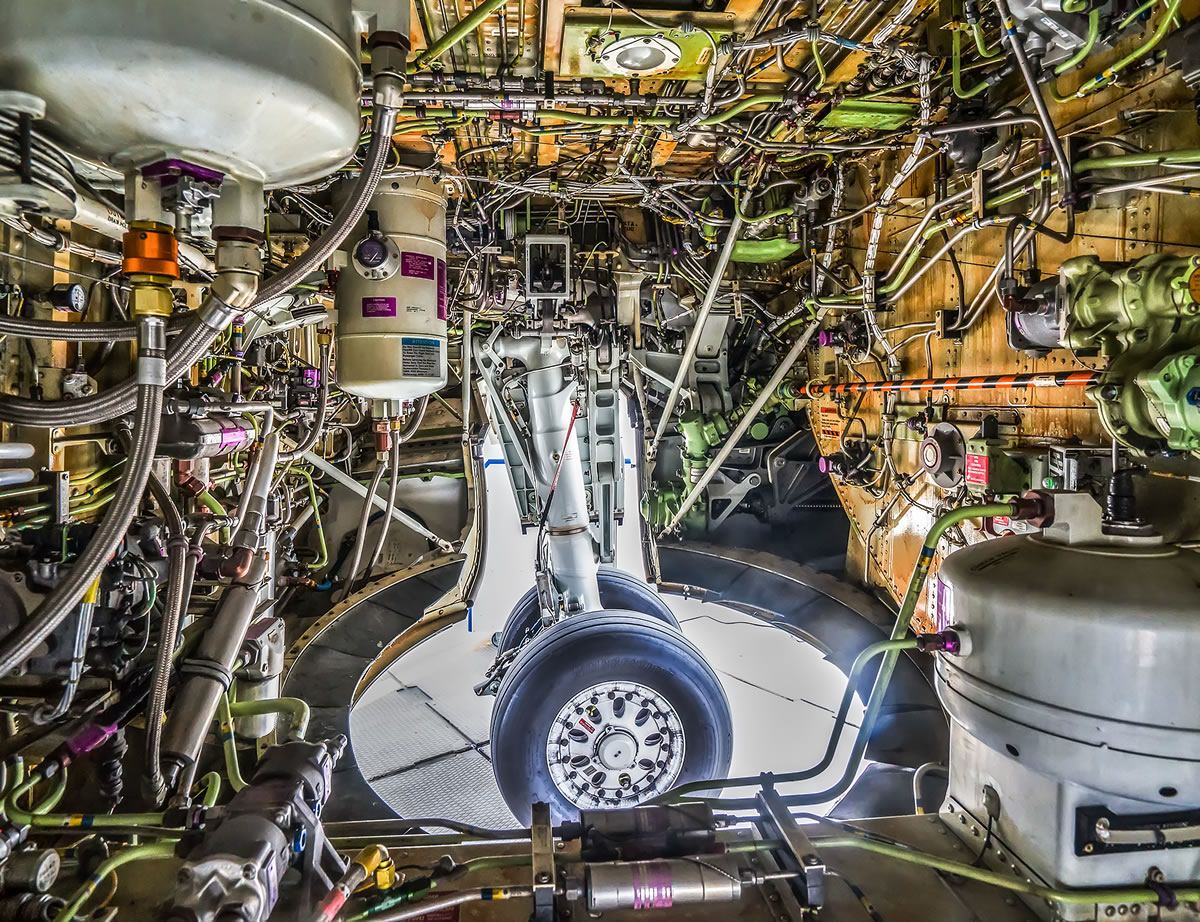 A major US-based airline MRO (maintenance, repair and overhaul) facility brought us in to evaluate their cleaning processes in their hydraulic shop, oxygen system shop, and landing gear shop. All three departments utilized large-scale vapor degreasers running either n-propyl bromide (nPB) or trichloroethylene (TCE). They were reviewing alternatives in search of a safer solvent that doesn’t sacrifice cleaning performance.

Before our involvement, they were seriously considering a Chemours Vertrel-based solvent, but it was very expensive and didn’t clean nearly as well as nPB and TCE. Should they just throw up their hands and say “that is as good as it gets for modern solvents”, or should they keep searching?

Luckily we had the opportunity to evaluate their cleaning processes and offer Max-Kleen, the safer choice for high performance cleaning.

N-propyl bromide is a toxic chemical commonly used during aviation MRO. The chemical is used in a variety of industrial cleaners and degreasers such as aerosol cleaners, vapor degreasers, ultrasonic cleaning equipment, and immersion cleaning. NPB is commonly used as an industrial cleaner because it is nonflammable, has high solvency, and meets many aerospace manufacturers’ standards. Ironically, it has been billed as a “safer” alternative to legacy solvent cleaners like Trichloroethylene (TCE) and Perchloroethylene (Perc) but has since been shown to have safety issues of its own.

There are cited examples where workers suffered major health effects when exposed to high levels of nPB. Workers reported headaches, dizziness, and even loss of full body control. Further studies have shown a possible link to reproductive problems and cancer.

While federal agencies have been slow in regulating nPB, CA OSHSB has a PEL of 5ppm and listed it as a developmental/reproductive toxicant under Prop 65. Pennsylvania has included it on its hazardous substance list. ACGIH has listed the TLV for nPB as 10 ppm, but there is a proposal to decrease it to 0.1 ppm. Comparable to TCE, PCE, and MeCl in toxicity, nPB has been determined by NTP as “reasonably anticipated to be a human carcinogen.”[1]

The US Environmental Protection Agency (EPA) has determined that n-propyl bromide (aka nPB, 1-Bromopropane, 1-BP, CAS 106-94-5) “presents an unreasonable risk for 16 conditions of use” in an August, 2020 report. “Nontechnical Summary of the Risk Evaluation for 1-Bromopropane (n-Propyl Bromide)” states that nPB should not be used for industrial and consumer cleaning and degreasing, including in vapor degreasers and aerosols. [2]

Trichloroethylene is currently heavily restricted at the state and local level, with very few restrictions imposed at the national level. As of December 31, 2006, TCE is prohibited in use as an adhesive remover, electrical cleaner, and graffiti remover in California.[3] Studies implicate TCE in cases of liver, kidney, and lung cancer:

So if nPB and TCE are so scary, why are maintenance shops still using those solvents? Truth be told, they are excellent cleaners and have the added benefit of being non-flammable and reasonably priced. While it might be easy to find a cleaner to match their cleaning performance, it is considerably more difficult to match up with all the other advantages.

What is Vapor Degreasing?

Vapor degreasing is the cleaning process which involves condensing solvents vapors on the object that is being cleaned. The process doesn’t require any water or scrubbing. Instead, the vapor-degreasing machine uses solvent vapors to cleanse and remove contaminants from parts. This process is used to clean various materials during the manufacturing process such as plastic, glass, metal, gold, and ceramic.

In its most basic configuration, a vapor degreaser contains two tanks that are called sumps, a metal basket, and bands of cooling coils. The first sump boils the solvent (boil sump) and the second sump (rinse sump) collects the solvent distillate.

As a secondary cleaning method, the parts may be dipped into a boil sump, then agitated with high frequency ultrasonic for additional agitation.

The clear benefits of vapor degreasing are superior cleaning results, repeatability, and lack of dependency on operator techniques and manual cleaning methods. The use of vaporized solvent avoids cross-contamination, which is a problem with cleaning methods that reuse either solvents or cleaning solutions from part-to-part. The use of solvents enables objects to dry quickly without a secondary drying process.

Although vapor degreaser solvents are generally expensive compared to other cleaning materials, they are continuously recycled in the closed-loop process, which can make it an economic method of cleaning over time. In addition, compared to batch or inline systems common with aqueous cleaners, vapor degreasing doesn’t require heating water, rinsing, drying parts, or treating wastewater post cleaning.

How to Select the Best Vapor Degreasing Solvent?

It’s important that a vapor degreaser solvent is as close to an azeotrope as possible, meaning that all the solvent constituents boil at around the same temperature. This ensures the formulation does not change as the solvent is vaporized and reconstituted hundreds of times in the closed-loop cycle.

An azeotrope (as used in the cleaning world) is a mixture of two or more liquids whose chemistries are exactly the same in both vapor and liquid phases. There are properties of any azeotrope which are unique. For example, a binary solvent blend contains two solvents, each with its own boiling point. When one combines these two solvents in a precise manner, the resulting product exhibits a boiling point different than either of the individual components and it maintains that boiling point throughout the process. It acts as a single component product.

When using a non-azeotrope solvent, solvent losses will occur from either vapor escaping the cool zone or in drag-out, causing the relative concentrations to shift. Depending on the composition of the solvent blend, the operating condition of the equipment, and the amount of time, the change in the component ratios may produce an unsafe operating condition, or at the very least, impede cleaning performance. For example, one component of the solvent mixture may quench the flammability of the other, so a change in the component ratio could increase the likelihood of the vapors igniting.

Hydraulic systems are both robust, yet sensitive to outside contamination. When you work on hydraulic systems and components, cleanliness is imperative to maintaining integrity within the system.

The greatest challenge is finding degreasers and hydraulic-system compatible cleaning solutions that can clean out the hydraulic lines and interior passageways through hydraulic components still in-line with a sealed system, while leaving no detrimental residues from the cleaner.

A landing gear assembly is a magnet for filth. There are dozens of zerk (grease) fittings in the assembly, and many of the individual components of the landing gear assembly are heavily lubricated. Grease attracts grime, rubber and brake dust, and overall filth. Parts that are around the brake assemblies also get a good baking from radiant heat.

It is imperative that the old grease be fully removed whenever parts are removed for repair or inspection (bushings, sleaves, etc.). Old grease is full of contamination and will contaminate new grease immediately if it isn’t completely removed.

Landing gear maintenance relies heavily on clean parts, so grease removal is foundational to the process. However, they also need to be safe, maintaining a low flashpoint and leaving no residue. 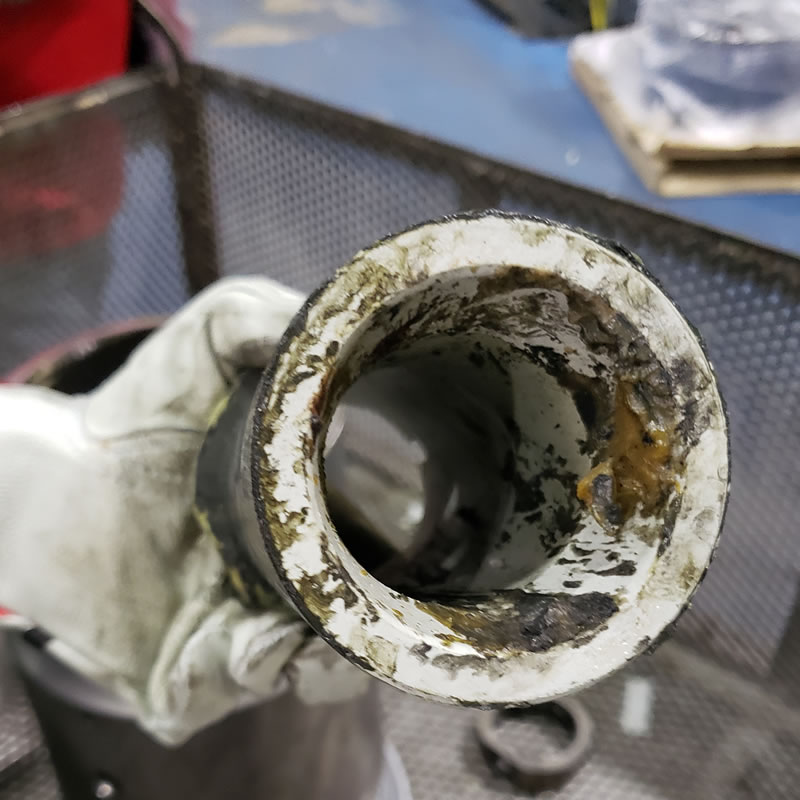 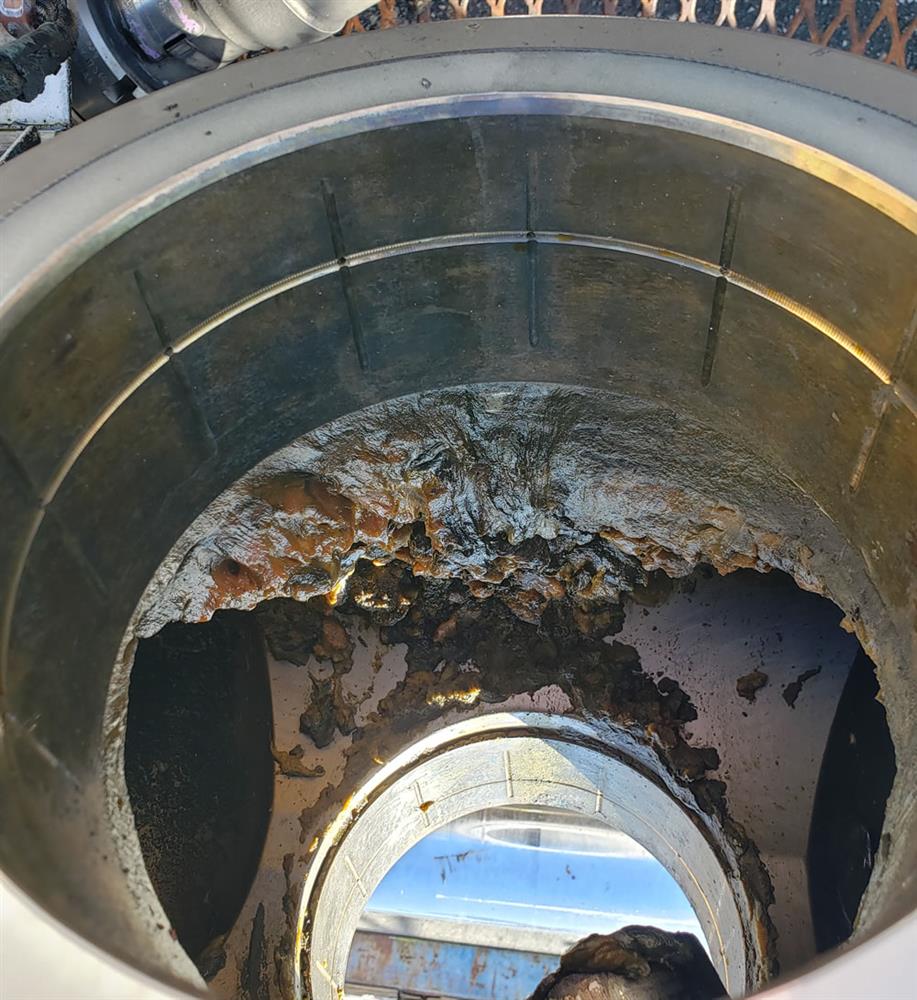 Caked grease inside a cross member bushing from 737 landing gear.

The oxygen system is highly sensitive to outside contaminants. Oxygen shops need to be held to the tightest standards of cleanliness. Keeping oxygen components free from outside contamination is literally a life-or-death issue, so choose cleaning agents wisely.

A hurdle of oxygen MRO facilities is finding cleaners that are non-toxic and nonflammable yet which thoroughly clean oxygen systems without leaving residue.

The goal was to identify a single vapor degreasing solvent to replace the n-propyl bromide (nPB) and trichloroethylene (TCE) based solvents currently being used in their various departments. It had to perform just as well yet be much less toxic. Many commercially available solvents intended for vapor degreasing tend to be very expensive, so we also hoped to bring down the cost.

After extensive in-house testing at the Chemtronics lab, cleaning many of the most common aviation oils and greases, Max-Kleen Tri-V high performance solvent (part #VVV5579) was recommended. We were confident it would work, but of course, the customer still needed to qualify the product within their own cleaning operations.

To reduce the risk of performing the required qualification testing and potentially being stuck with the cost of material and disposal if it didn’t work, we offered a money-back guarantee on the drums required to charge their massive vapor degreasing unit.

Tests were then performed on a wide variety of parts and soils. Smaller parts were lowered in a basket while larger parts, like landing gear struts, were hoisted down directly (see photos). 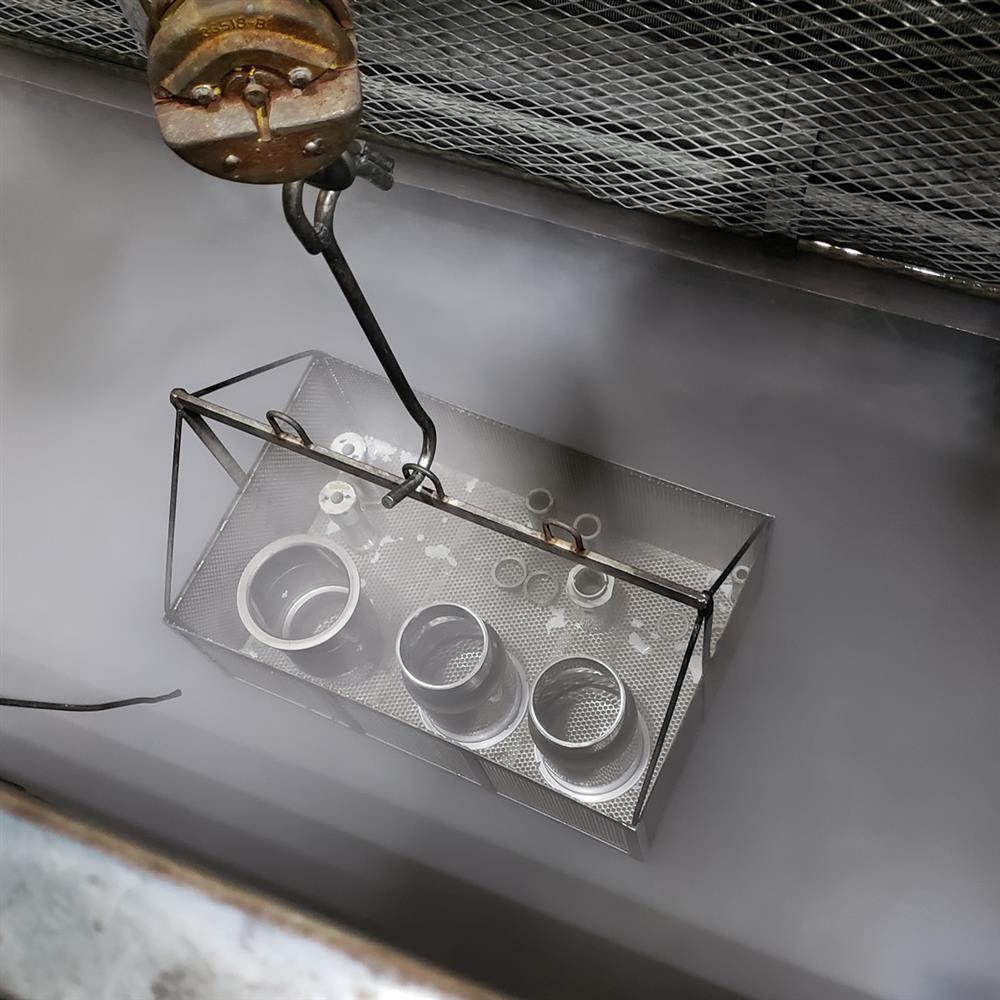 Assorted bushings and other landing gear parts being lowered into the vapor zone. 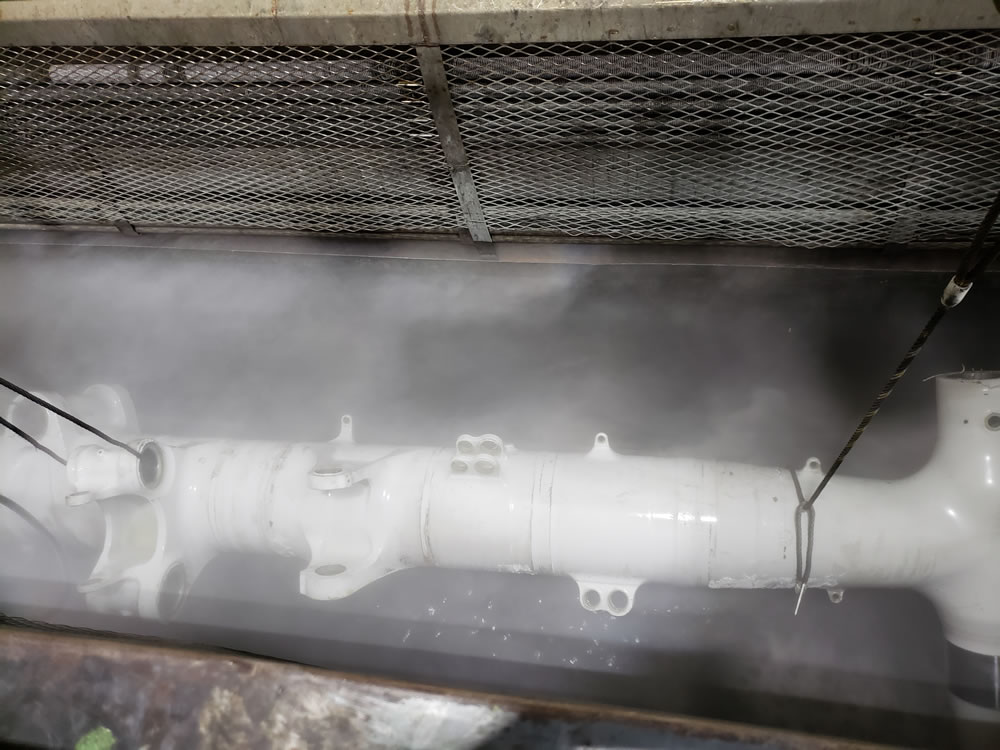 Landing gear strut being lowered into the vapor zone.

The cleaning performance was as good as their previous cleaners, and the odor was much better. The next question was yield: how many parts could be cleaned before changing out the solvent for fresh or reclaimed solvent? Max-Kleen Tri-V lasted as long as nPB and TCE before becoming fully loaded with soil.

Because it is a true azeotrope, it is able to be recycled through a reclamation unit, saving money and reducing hazardous waste. As an added benefit, simplifying from two solvents to a single product also reduces the risk of cross contamination in the reclamation process, leaving traces of one solvent mixing with the other.

The qualification testing was a success and Max-Kleen Tri-V is now their solvent of choice!

Max-Kleen™ Tri-V removes of all types of soils common in aircraft component degreasing.  It is stabilized for metals such as aluminum, magnesium, titanium, and brass. Tri-V is an innovative chemistry that does not contain any nPB, TCE, any hazardous air pollutants or ozone depleting compounds. This extra-strength cleaner evaporates quickly without leaving a residue behind.

Max-Kleen Tri-V is a true azeotrope, so both the liquid and vapor phases maintain the same composition. It acts as a single component product, so will not fractionate as it boils. This avoids any performance changes as it is used over a long period of time, or is run through a separate reclamation unit.

Max-Kleen Tri-V has been tested and qualified under Boeing BSS7432, which includes the following tests:

For more information, contact your Chemtronics application specialist at 678-928-6534 or info@itwcce.com. 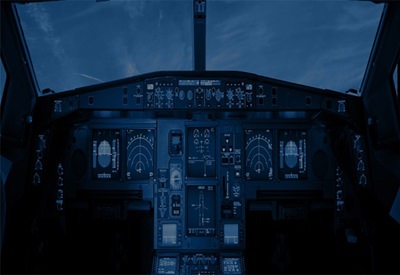 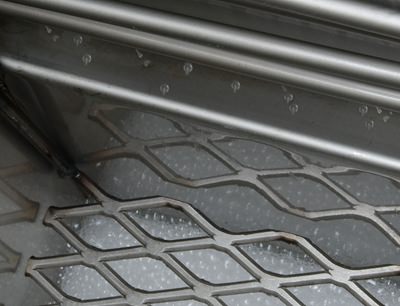